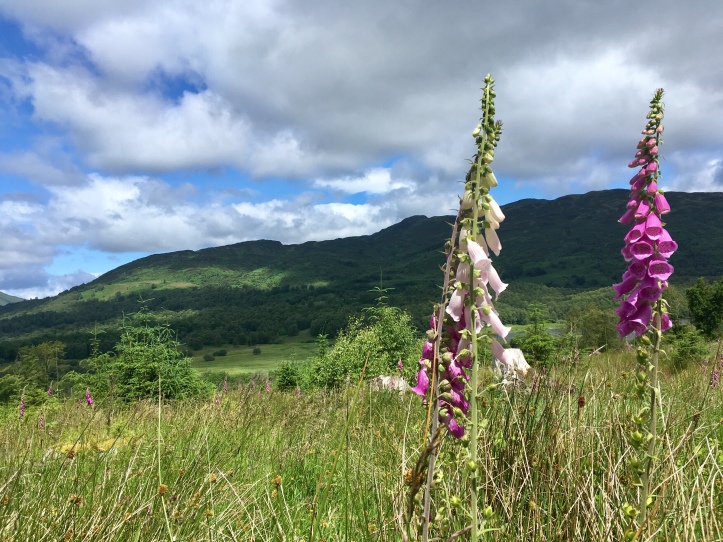 We slept like logs in our cosy little room in the Kirk and knowing that we did not have a swift start, enjoyed a relaxed breakfast with our fellow guests, two couples from Germany who having completed the West Highland Way last year, had returned to walk the Rob Roy Way. Our hostess Francis ensured that there was a constant supply of breakfast comestibles; indeed she could not have been more accommodating, she clearly loves what she does and it shows in the care she takes to ensure that all her guests’ needs are met. On discussing our onward plans a friend was called who had cycled the route to Inverness to give advice and warned to take care over Drumochter Pass as the cycle way is rather rough.

Bidding a now fond farewell to the Kirk, we set off for what we knew would be a day of hills from the get go. Indeed on leaving behind the village of Drymen we began our first long incline of the day, a mile long gradual rise up to the hills above the town. We had not been going long when we caught up with our German friends who cheered us on as we all waved a cheery ‘gute reise’ to each other before we left them in our wake.

Climbing up we found that though we were working hard, unlike our initial days on the trip, this was a manageable level of exertion that we could continue for an extended period without being completely spent. I suppose there are a number of factors to this, a) we were no longer carrying so much weight; b) the hills are not so vertiginous and c) we are now more cycling conditioned. Today our spirits were high, we knew we were working within our capabilities, even when the going was tough, we were not feeling totally spent.

Today the scenery was becoming far more dramatic and rugged, up to this pint on our journey we have enjoyed the passing countryside, though it is very much of the ilk that we are used to seeing on our familiar rides. Yesterday the distant backdrop to the softer landscape we were surrounded by gave the promise of the spectacular scenery we would find today.

Today offered new and exciting sights to see, and though the breathing was heavy on the long hills, it was clean mountain air being sucked into our lungs with not a hint of fetid fumes, we were on mountain roads, but the traffic was few and far between.

We made good time to Gartmore, and soon picked up a dedicated cycle-path that took us on to Aberfoyle where we caught the first glimpse of the rather large hill we would be climbing. Undaunted though as we knew the route was zig-zagging us up and over to the other side and renewed in our confidence to set the pace to best peddle upwards. That is not to say that it wasn’t damn hard work!

Once through the town, the route initially wended up the mountain via the road but soon diverged to a dedicated cycle path through woodland which forms part of the Queen Elizabeth Forest Park, which in turn is part of the wider Loch Lomond and The Trossachs National Park. Though demanding on the legs it was delightful to cycle through this area to the sounds of birdsong and babbling brooks. We passed through play and adventure areas that would appeal to children of all ages (we are all still children at heart!), each corner brought a new enchantment, this really was the place of magical faery glens.

We stopped for coffee deeper into the forest where a bench had been placed in a charming spot surrounded by moss covered trees and overlooking a small waterfall which fed a little brook. It really was the epitome of tranquility.

We tarried over moving on, but began to chill and so were prompted to in order to warm up, which we quickly did in our slow and steady climb to the top. As we progressed toe dappled mossy woodland gave way to a more rugged terrain as we descended down to Loch Drunkie, skirting round an outstretched finger of water before climbing up and over to drink in the view of the larger Loch Venachar. The National Cycleway Route 7, which we have followed all day today, took us along the entire length of the south bank of the Loch. The going was sometimes a little hairy with short efforts up hills and quick descents on gravelly ground, but it was thrilling to be dashing through the glorious terrain in the dappled sunshine.

Realising that we were making very good time, our destination today being Callander, which was only now about a 30 minute ride, we pulled over and had lunch on the banks of the Loch and took some time to just sit and stare, enjoying the splendour surrounding us.

The chill in the wind again prompting us to eventually move on, we found our lodgings in the affiliated Youth Hostel. We had taken a chance as all the private rooms were taken, and booked a couple of beds in a small mixed dorm with its own en-suite. Our gamble paid off as we have it to ourselves, Mr V is relieved as his biggest bug bear is other people’s snoring, he had already eyed up the large soft leather sofas in the sitting room as an option.

We took a little stroll into Callander town, which we discovered has two distinct areas, the town itself and the side of the river were we are, known as Bridgend. In days of yore there was no bridge and the river was forded, and it was only after the bridge was build that the two parts became one. We passed the now disused graveyard, which we were informed by a passing lady was left fallow to encourage wildlife, she also pointed out the little structure built into the wall which was for the watchman to guard against body snatchers!

Callander itself is a busy little town with an abundance of coffee and knick-knack shops vying for the tourist’s coin. We self-catered this evening, opting for a healthier supper than yesterday, feeling virtuous that we had worked off the previous evening’s sticky toffee pudding!