Farewell to the City

Once the rain had abated, the evening air was clean and still so we took the opportunity to have a meander around the Kelvingrove park, enjoying the stunning sunset over the city accompanied by the sounds of a Stranglers tribute act now playing. Just as the previous evening all became quiet by 22.30hrs and we retired to slumber, only briefly interrupted by our neighbours arguing over the last chicken drumstick. Midnight snacking is clearly a serious business for them. 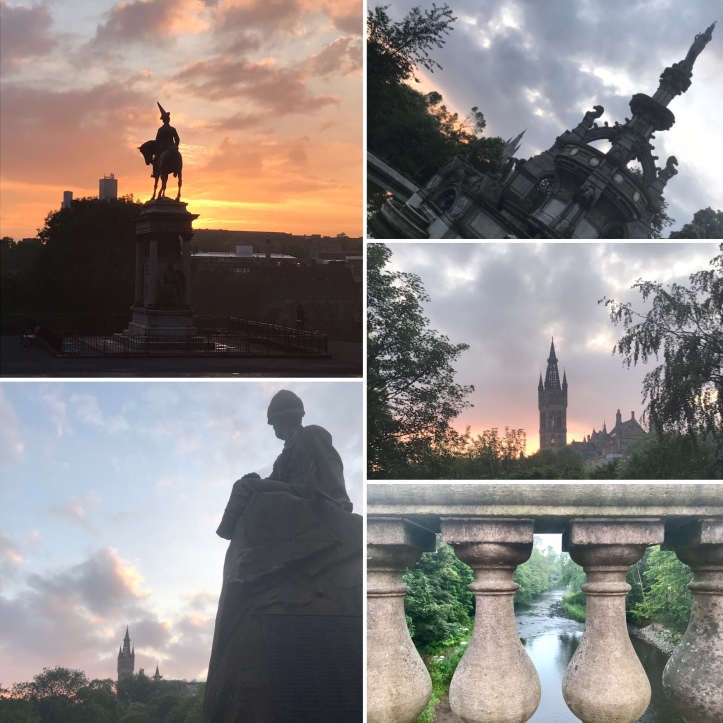 Though we woke early, we were in no rush to get away today as this next leg was advertised as the shortest and easiest in the guide, indeed as we had taken a days rest; on planning our onward journey for the next few days, we had decided to extend this portion to eat a little into the following day which was evidently rather more challenging. We retrieved Twolula from her stable and loaded her up to be on our way, bidding farewell to a chatty retired antipodean who had been touring the UK on his cycle since May and was now heading home via Edinburgh.

Mr V, clever chap that he is, had worked out how to plot a route in View Ranger and thus avoid the difficulties that we have navigating around cities with google maps, so we were quickly on our way joining up with the National Cycleway 7 through the city which we shall visit again and discover more of it’s mercantile history. Once on the outskirts the route utilised a disused railway route and canal, before joining another long-disused railway line. Just our sort of terrain. Trundling along the tow path, I noted that we were approaching Magic Cycles (View Ranger annotates the important things – pubs and cycle repair shops). We pulled in as one of the rear disc brakes required adjusting a little and we did not have the correct Alan key for it, the helpful owner (whose father had run the business before him) assisted us for a small donation. His work was though supervised to ensure that it was up to standard by the punctilious Judy.

Soon after departing, back brake working perfectly now, the rain that had been threatening all morning, began to make itself known. We had already donned our showerproof jackets, but needed to crack out the heavy duty waterproofs. We have been using our summer cleated cycle shoes for this journey, but had taken the precaution of packing protective over boots, and though they are not exactly chic, they do keep your feet dry and cosy(ish).

Having taken shelter under an old railway bridge to proof up, we emerged to find that the worst of the shower had actually passed. The wind that had accompanied us all morning was though still chilly and we did not feel the need to divest ourselves of the extra layer immediately. 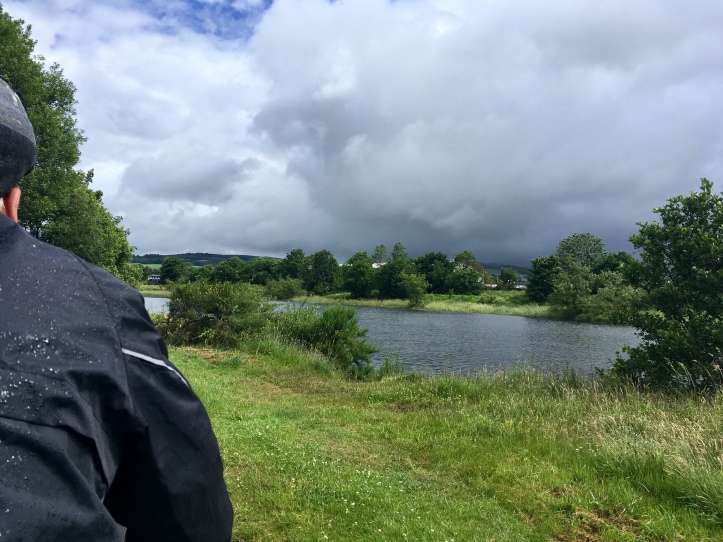 We reached Dumbarton without issue and stopped just the other side for a coffee between showers, overlooking the River Leven, which we would be following for a considerable way today. The going was pleasant and progress swift with the weather improving to positive sunshine by the time we reached Balloch.

This was the scheduled end of the leg, but as anticipated it was only midday by the time we got there. Drymen, our stopping place for the night was only another 10 miles beyond, so we took a bench in the sunshine to watch the river life for a while. This was short lived though as just as our bottoms touched the seats the chill wind picked up and we soon found ourselves shivering. We moved on hoping to find a cosy tea shop, but seemed to have bypassed the town’s purveyors of warm beverages finding ourselves riding through the extensive grounds of Balloch Castle County Park which abuts Loch Lomond and the Trossachs National Park.

Alas our route swung away from the bonny, bonny banks of Loch Lomond and we were reminded that we were entering the Highlands as we had some climbs to make to bring us to Dryman. We passed numerous walkers, heavy packs on their backs, as this route forms part of the West Highland Way. We found our charming spotless lodgings at the Kip in the Kirk, our host is the lovely Francis and her girl Friday Susan, who ensure that a welcome is provided with hot tea and warm home-made scones. I had read the rave reviews, and they did not disappoint! 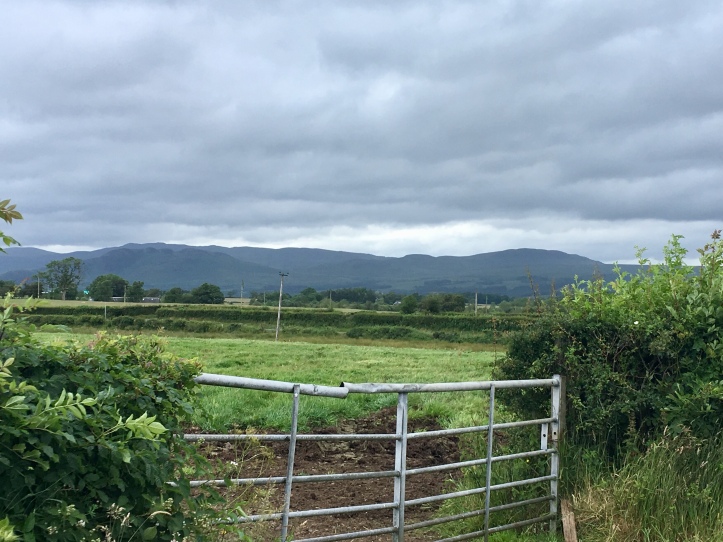 We spend a further hour or so going over our plan and strategy for the rest of our journey. We have our next three days and nights sorted, but how we progress further is contingent on whether we can take the train to Inverness with Twolula or not. Though when embarking on this journey our ultimate destination was a visit to see Mr V’s brother who moved to Orkney last year and we are keen not to reduce our time there. This is a place that I have always wanted to visit and explore, we never had the opportunity when we lived in the Highlands previously, and having booked our ferry already from Kirkwall to Aberdeen, are keen to ensure that we do not arrive only to turn around and depart. Given that we are not progressing as quickly as originally anticipated, having included some rest days, we want to make up some days. So we intend to depart from the planned route and plough our own furrow given that the most efficient way to cross to Orkney and reach Kirkwall is to sail from Scrabster to Stromness.

So after an evening of planning and plotting we enjoyed a lovely meal accompanied by a gentleman crooner, with a penchant for Simon & Garfunkel and drank to marching to our own tune.