Having made our way to Carlisle it is but a short hop over the border to Scotland, indeed Carlisle has long been a strategic stronghold and is often a visiting base to explore Hadrian’s Wall. From Carlisle we headed towards Gretna Green, which is famous as the first stop off in Scotland for eloping couples who were able to marry without parental consent at a younger age than in England. The original smithy is still there where the ‘anvil marriages’ were performed; Scottish law allowed for irregular marriages where almost anybody had the authority to conduct the marriage ceremony so long as it was before two witnesses so the local blacksmith and his anvil became symbols of Gretna Green weddings. We stopped off at the historic site, which now also has a sculpture garden and the requisite gift shop and cafe and had our picture taken by an obliging German lady, however we departed for Gretna Green town with the arrival of the one of the first of what is no doubt many daily tourist coaches.

The town of Gretna Green is neat and tidy and chatting with the gentleman who made our coffees we discovered that a lesser known aspect of Gretna’s history is what was known as the Devil’s Porridge. HM Factory, Gretna was the country’s largest cordite factory in WWI and the women who worked there, suffering considerable hardship are commemorated in the high street. 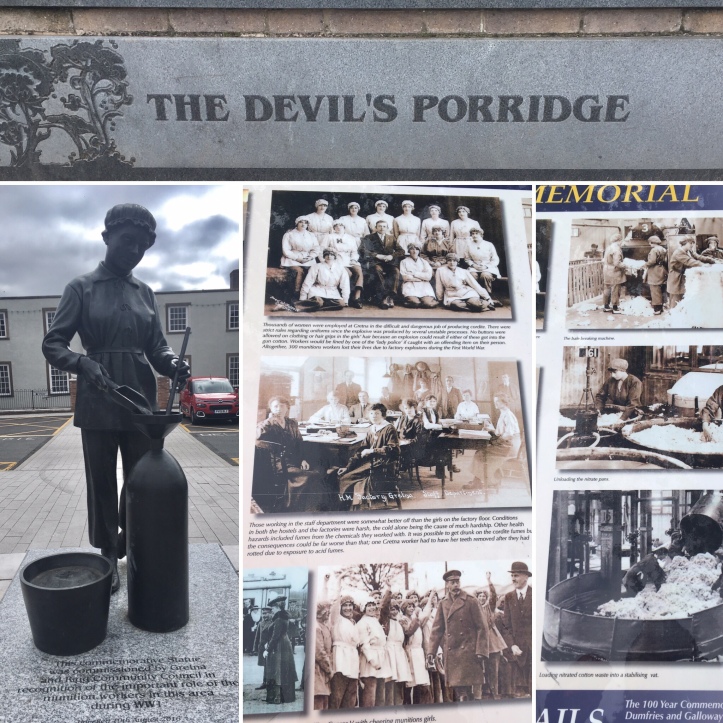 We had started early from Carlisle, Mr V had wanted to be on the road by 08.00hrs and we were in fact out of the door of our hotel by 07.30hrs so were very ready to stop for a break at 11.00. After our coffee and scones we pushed on following the cycle routes through the rolling Scottish lowlands. We have made good progress today as the going has been such that we are able to keep a consistent speed, only slowed by some short sharp hills and a few long gradual inclines.

Out in the countryside far from any towns the call of nature often necessitates seeking out a secluded hedgerow, today, though in the countryside, it was very much the managed countryside with not much opportunity between homesteads and not infrequent tractor traffic. The need though, fuelled by the rather large coffee, became insistent and so I took the chance of quick undisturbed alfresco relief but a few curious young bullocks meant I could not escape all curious eyes!

Our route then took us onto what must have been the old main road that ran alongside the busy M74 which we lost count of how many times we crossed back and forth as our road wended northwards. Though there was a dedicated cycle path for the majority of the way, this was in parts in very poor condition and would have been hazardous to cyclists, indeed we had to stop and tighten Twolula’s couplings such was the loosening effect of the uneven surface. We stopped for lunch at Lockerbie, finding a lovely peaceful park relaxing in the warm sunshine and dappled shade from trees planted in remembrance to those lost in the WWs. We did not though visit the remembrance garden to the infamous tragedy as it was not until after we had left we realised that this is about half a mile west of the main town.

Having set off early and made good time, we arrived at our hotel in Johnstonebridge a little early to check in, however the lovely lady receptionist let us stow Twolula securely and looked after our bags as we took a wonder around the lake and enjoyed a well earned ice cream. Though our accommodation for the night is off a motorway junction, it is peaceful and our balcony overlooks the lake and abundant wildlife; a little oasis from the nearby hurly-burly.

In the years since we have been tandem riding, friends and family have often shared interesting articles; a maxim from one which we often quote though is ‘In whatever direction your marriage is going, a tandem will get you there quicker’! We have smugly found this entertaining, only ever having revelled in the teamwork; we have however had a little insight into the sentiment over the first few days of this trip, where exhaustion makes obstacles seem insurmountable and impairs decision making to the point of frustration. We have today though felt like we are back to our old selves and again finding our stride and enjoying the experience. We have a relatively shorter day tomorrow – there is a long climb on the approach to Abington, but we are not looking at it daunted, with too much weight, but choosing to view it is a decent workout on a leaner bike!