Though the morning dawned a little hazy, the sun was already warm by the time we had started to break camp. Much as the sunny weather is lovely, after a full days ride, in the heat of the afternoon it can really sap your energy and leave you feeling hot and sticky. The forecast was for cloud and sun, and we hoped there would be cooler going than we had the previous day.

We were packed up and ready to go by 8am, but there was no sign of the site owner, and we had yet to pay for the nights camping. Walking up to the house, I rang the bell but no response. There were a couple of notices on the door so pressing google translate into service I gathered that they do not always hear the bell, and any packages are to be left in the outbuilding to the right. Calling the number quoted, the sleepy voice at the other end said that she would be down in 5 minutes. We mused that we could easily have camped used the facilities and been off before anyone knew, without paying the €15. But as Mr V pointed out, we are not those kind of people.

Heading into Gorinchem to replenish provisions, I emerged from the store and was not immediately able to locate Mr V, as he had company and was surrounded by a family of 3 engaged in earnest conversation. Introductions were made and it transpired that Jaap-Jan and Willeke were out with their son Jonathan, having just dropped off their youngest 3 children for their first day at school, having just returned from Indonesia, where they were homeschooled. This adventuring family were considering buying 3 tandems so that they can go touring all together. Jaap-Jan is a pilot and flies the small planes that have to land in tricky places throughout Indonesia. Mr V and I recalled watching a series of programmes about this and being amazed at the skill of the pilots and the dangers they faced on a daily basis. Jaap-Jan was very modest about all that though, and was mainly interested in riding a tandem. All in all they were a family who wanted to live life fully and gain experiences through adventure at whatever level.

Leaving Gorinchem behind, continuing our southerly progress, we peddled along through the National Park De Biesbosch which is an extensive area of tidal wetlands which is made up of a network of islands separated by creeks and rivers. This was the first time that we have felt that we were out in a relative wilderness as though we have been in some isolated places, the majority of the countryside has been managed, for arable or hydraulic engineering. Birdsong accompanied our progress from the hedges and trees along the way, but the predominant sounds were those of the wading birds. 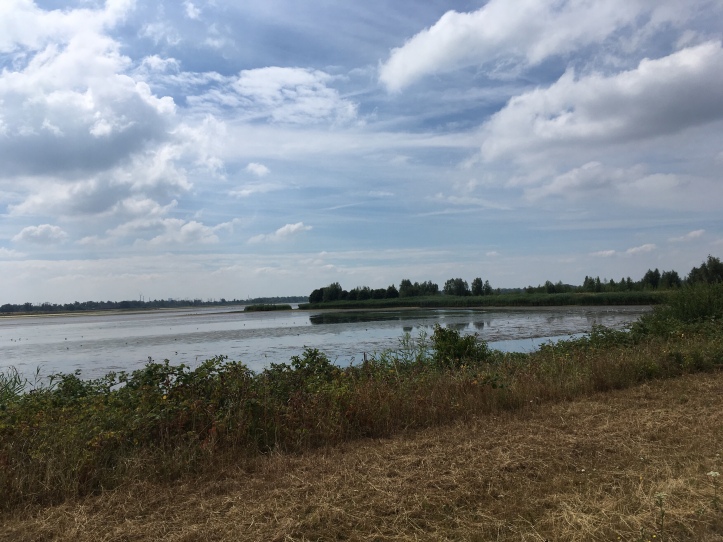 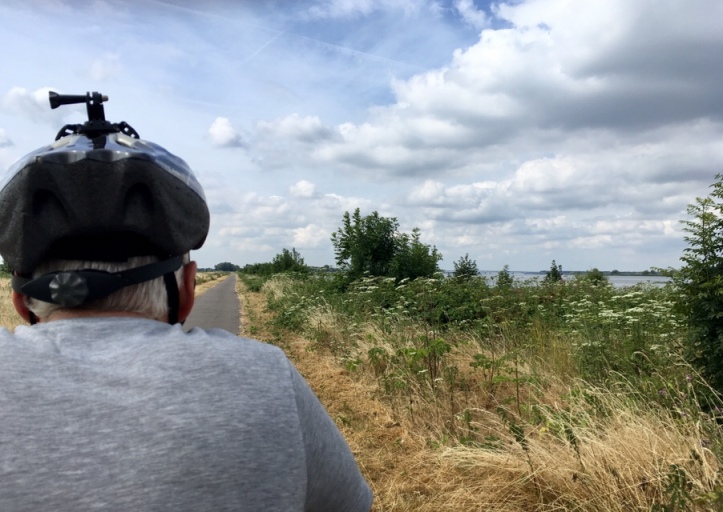 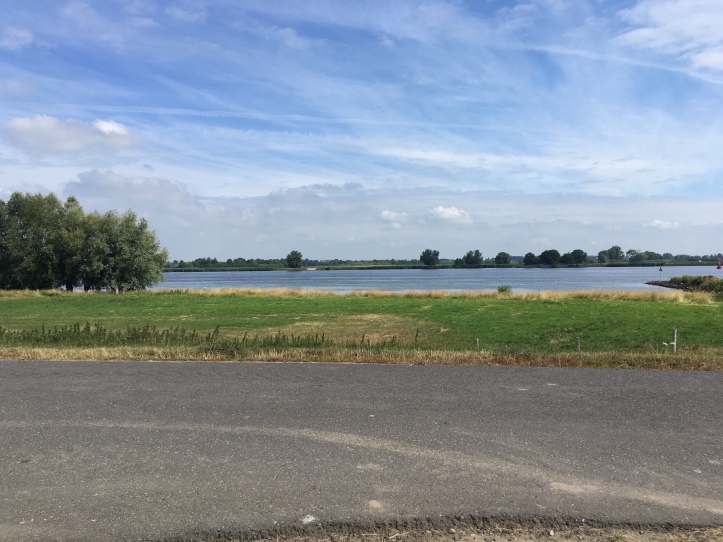 The air was fresh with the hint of the briny sea and the blue sky was filled with scuttling clouds. Though not pretty in the picture postcard sense, the area was a peaceful haven notwithstanding the boat traffic along the main outlet. We had our coffee break sitting aside this channel where Mr V utilised the monocular to better view the passing boats. Mr V, a sea cadet in his youth, is a frustrated sea-goer at heart.

Travelling on through the park necessitated a ferry ride and when we drew near to the waiting passengers, there was another tandem. It is a tricky manoeuvre to get one tandem onto the small ferry boats, but two! We squeezed on and trundled over the water, and were surprised to see waiting to board on the other side, yet another tandem. The ferryman must have been wondering what was going on. Three tandems in one day. We disembarked, narrowly avoiding slipping into the water and were pushing our way through the deep gravel the other side, when the lady in the cafe called us back. No we did not want to stop for a drink thank you, but then realised that it was she whom we must pay for the ferry. Oops!

Making our way to just north of Breda, peddling though a small town we commented on the fine steeple of the church as we rode past. Onward to the next junction point, past some pretty ponds with water lilies and into another town, only to realise when we again saw the fine steeple from the rear that we had gone around in a circle. Referring to the Ranger we managed to escape the ever decreasing circles.

We have found ourselves a rather nice campsite, advertised as mini, but in actual fact more midi. We have discovered that the elderly caravanners make quiet neighbours. The normal evening routines of pitching tent, showers and supper done, we are enjoying a small bottle of red between us, I don’t care what our Swedish friend says, mugs are so not a luxury. The only downside is that we have seemingly angered the ant population. Thank goodness for the netting doors on the tent.

Southwards into Belgium tomorrow, another voyage of discovery.