If you go down to the woods today …

We awoke to our tent dappled in morning sunshine and set about our now familiar routines. Having stayed more than one night in the same place, it seemed that the local bugs had taken that as licence to assume residence between the outer and inner sheets of our tent and had to be forcefully evicted by Mr V. We were packed up and making to depart with Mr V’s usual de-camping efficiency, when our neighbour, a charming Frenchman, passed the time of day with us and enquired about our journey. He wistfully informed us that he had a tandem when he was younger, and given that he was travelling alone, one can only guess at the romantic or even passionate road that he may have travelled in his more youthful and carefree days. Well let’s hope so anyway.

Today’s journey was to be entirely along one of the main LF cycle routes, the LF14 and so there was no need for plotting and the guarding of the precious scrap of paper holding the essential sequence of numbers. The LF14 is also called the Saksenroute (Saxons Route) and is dotted with prehistoric burial mounds, medieval cart tracks among other points of interest.

We left Groningen and quickly picked up the route and before long were gliding along the surrounding countryside making our way southward. The lovely thing about cycling through such bucolic scenery is the proximity to the wildlife. I suppose there is no footfall so our approach is relatively quiet, but also I expect, the wildlife has become used to the cycleway traffic and does not see us as a threat. The other day we were startled by vigorous splashing coming from behind some reeds on a body of water we were passing, and all of a sudden two swans took flight, circled round and swooped right in front of us. It was a joy to watch, our own personal flypast from one of natures elegant birds and no noisy jet engines! We have seen dotted about, many nesting platforms for cranes, but today for the first time we saw a number of them with occupants, and were also treated to an aerobatic display by a pair, twirling around the sky overhead. 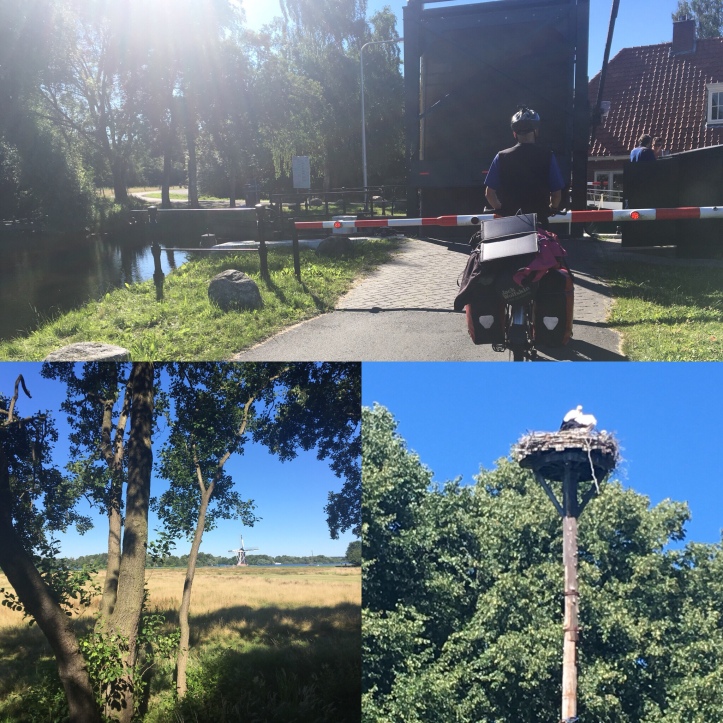 Today’s journey has been delightful, for the most part we have been travelling through wooded areas, mainly deciduous, but some meticulously planted evergreen. Though the day has been hot, we have been protected from the full glare of the sun for the majority of the time. The accompaniment of our progress has been almost constant birdsong, which really does gladden the heart.

We stopped for coffee in a sunny clearing with a table in the shade of a tree and view of a wheat field and windmill. It was the epitome of perfection and could have been the subject of a classic landscape painting, we soaked it up.

Onward though we pressed after our rest, the going for the most part on nice smooth tracks, other than one stretch of fine sandy surface which is always accompanied by a little trepidation as Talula has a tendency to let her back and front end slip away on such terrain. 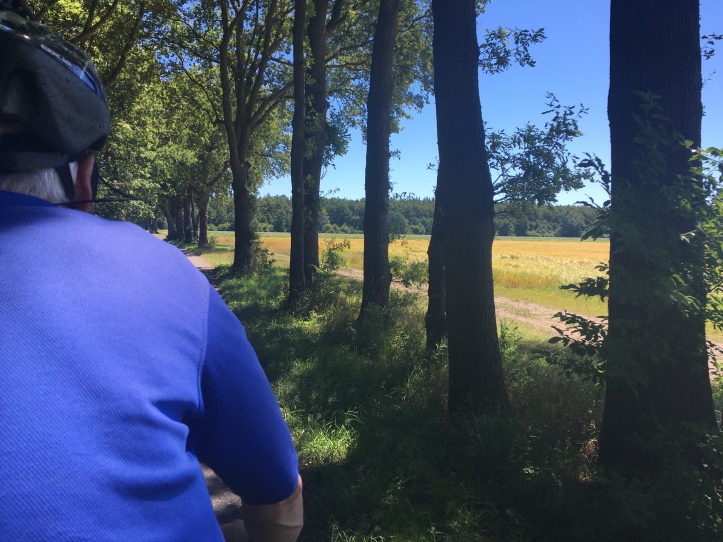 After a couple more hours, our derrières, softened by a day out of the saddle, were in need of a rest and so we kept our eyes open for a suitable place to stop for lunch. We spotted a few, but other travellers had the audacity to be occupying them. We came to the outskirts of Borger, home of the ‘hunebed’ museum (megalithic tomb) and the biggest hunebed in the world, which we saw briefly as we rode by. Thinking that we had run out of prime spots to lunch, we were about to resign ourselves to cycling on, when an inviting archway into the woods on our left begged to be explored. I scouted ahead to see if it was worth wheeling Talula down the narrow track, and called Mr V to come along as to our delight there hidden away was an open air theatre with a picnic area at its entrance.

Refreshed and fortified we rode on, making swift progress southward until it was about time we needed to seek out where to pitch our bed for the night. We asked our old friend google, who found a small site with good reviews close by. It was basic, but spotless. We quickly pitched our tent and then set out to the nearby town to get provisions. Those provisions included an emergency USB charging plug as I had inadvertently left our adapter for the 3 port USB plug at our last campsite. Although Mr V has been very patient as he nearly did the same thing a few days before. I am still kicking myself though!

On returning (fortunately successful in the quest for a plug, albeit single port) we were eating supper in the rustic small barn when one of our fellow campers stopped for a chat about journeys and so forth. It transpired that the gregarious Olaf and his lovely wife Kerstin have a similar long term plan to us of kitting out a van ( all terrain vehicle for them) to go travelling and cycling, though they have already ordered their van as it has a 2 year waiting list. Later on we shared an extremely enjoyable and informative evening over a bottle of fruity red, where Olaf regaled us with tales of his extensive travels on motorcycle and bike, and thanks to him waxing lyrical about the route down the river Ems, we shall be heading into Germany next.

This is what is called a mini camping site, and there does seem to be a distinct difference in feel as it is rather more sociable than previous sites with strangers (mostly other cyclists) engaging in jolly exchanges. Maybe it’s the small site, or maybe it’s the Olaf effect.