Not Quite Tulips from Amsterdam

After a quiet night (our previous night’s sleep having been disturbed by a marching band striking up at about 10.30 pm) we left our tent pitched at Heemskerk and were able to travel swiftly along the byways and highways to Amsterdam with but a single pannier.  We followed the 35 towards the 66 and then made our way to the 69, after which we once again called upon the Lone (View) Ranger to help us wend our way to the third ferry of this trip and thence onward to the city centre. 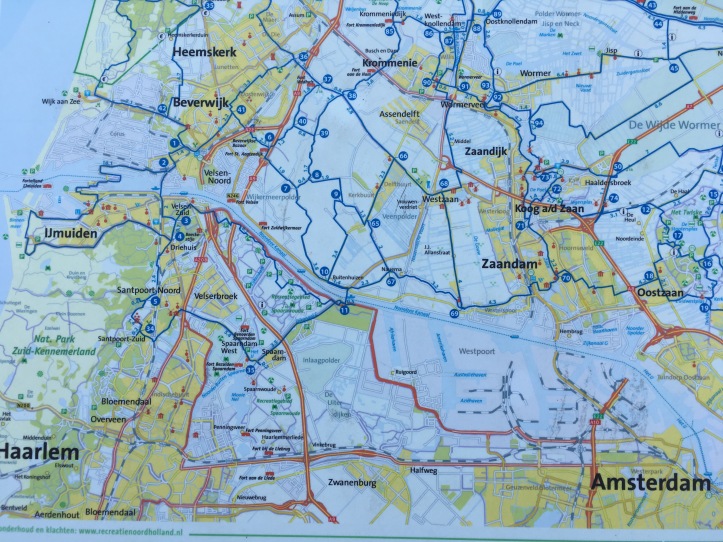 We had envisaged having a rather mellow couple of hours meandering around the canals, and soaking up the ambiance after our two hour cycle. We did have a relaxing lunch in a park on the outskirts. Alas what we found when we ventured further towards the centre was far from mellow.  Navigating the narrow streets became somewhat difficult with the crowds. It seems that the custom is for cyclists to ring their bells insistently and expect pedestrians to move, but Mr V is far too polite for such bullish behaviour.  The difficulties manoeuvring were exacerbated by the fact that motor scooters are permitted to use the cycle paths. These have taken us by surprise in the last couple of days but you do get used to the odd one zipping past. However, in the city they are legion, and impatient.

Amsterdam is certainly a vibrant place, almost frenetically busy, with the waft of weed seemingly at every turn.  Given her length though, Talula is not really nippy enough for such an environment, so we did a whistle stop circuit and headed for a quiet square further out for a liquid nerve stabiliser before our homeward journey.

Once again today technology has proved invaluable for finding our way, and the recent changes to data roaming in EU has meant that we have not had to scrimp with usage. The only downside is battery drain, so our booster packs have been put to good use as has the solar charger.

We have today enjoyed the advertised flat cycle ways, which has meant that we can lick along at quite a rate and have delighted in the picturesque villages en route with traditional houses. We even spotted a real windmill!

The forecast for tomorrow is again fine, but with rain overnight, so we have booked ourselves into one of the vrienden op de fiets in Hoorn.  A real bed. I cannot wait!